Icecream: A Sweet History of an Icy Treat

Every American person should know the old rhyme “You scream! I scream! We all scream for ice cream!”  In any country in the world, the word Ice Cream brings to mind memories of summer. Hot hazy days lounging in the shade with a dripping cone of the icy treat.

Ice cream is the ultimate treat but where does it come from?  The history if ice cream stretches right across the world.  In Italy, it’s called gelato, in India, Kulfi and in Japan its Mochi. Everywhere enjoys ice cream so let’s delve a little deeper into its history.

The Origins of Ice Cream

There are some who say that ice cream came from the Far East, with Marco Polo. Yet others say it was Catherine De Medici who took it to France when she moved there to marry King Henry II.

It’s unlikely that either of these stories is the truth because ice cream goes back much further than that.  What we eat now bears almost no resemblance to what ice cream used to be. Passages in the bible refer to King Solomon partaking of cool ice drinks throughout the harvest season.

Alexander the Great from Ancient Greece drank iced drinks that were flavored with wine or honey. Between 54 and 68 BC, while Nero reigned Rome, there were ice harvest from the mountains. The ice was kept in ice houses, which were deep straw covered pits and used to make icy drinks.

The first instance of anyone eating frozen sweet treats is believed to go back to the Tang Dynasty, between 618 and 907 AD.  The emperors were thought to have eaten frozen milk confections, made with milk from cows, buffalo or goats and heated with flour.

Camphor was harvested from evergreen trees and added to give it a flavor and a better texture. The entire mix was then put in metal tubes and stored in ice pools until it was thoroughly frozen.

In the Medieval era, it’s thought that Arabs would drink icy concoctions called sherbet (sharabt in Arabic). This would be flavored with quince, pomegranate or cherry.  As time went by, this type of dink would become a favorite of the European aristocracy with the Italians being the first to master it followed by the French.

From Sorbet to Ice Cream

In the 17th century, ice drinks would be made into desserts. Sugar was added and thus we saw Sorbet.  The man responsible for writing the first ever recipe for sorbet and also for creating one made with a milk base, was Antonio Latini, a man who worked in Naples, for a Spanish Viceroy.  This milk sorbet is commonly considered as the first proper ice cream. 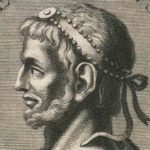 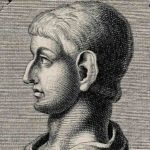 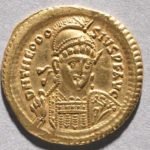 The first Café in Paris, called Il Procope, was opened in 1686 by a Sicilian man called Franceso Procopio dei Coltelli.  It because a popular place for intellectuals, such as Benjamin Franklin, Napoleon and Victor Hugo to meet up.  It was here that gelato was first served.  Gelato is an Italian version of sorbet and was served in tiny eggcup size bowls.

At about the same time, the French were beginning to experiment with something called Fromage.  Nicolas Audiger, a French confectioner, wrote a book called La Maison Reglee in which he noted down several different Fromage recipes.

These were made from fruit flavored ice and one that he noted included cream, orange flower water and sugar.  He also suggested that if the ice were stirred while it was freezing, air would be introduced and the result would be fluffier.

You could be mistaken for thinking that Fromage was cheese but it wasn’t and it is not clear why they chose this name. One thought is that cheese molds were used to freeze the desserts or it could just refer to the French for any edible substance that had been compressed or molded.

When Ice Cream Arrived in America

We cannot really pinpoint the exact time when ice cream arrived in America. It is widely belied though that is arrived in the early 1700’s, with European settlers.  By now there had been a few books published on confectionary, containing recipes for ice creams and ice drinks.

Housewives served these desserts to houseguests, molded in the shape of animal, vegetables and fruits, thanks to special molds that had been developed for the purpose. In 179, New York opened the first ever Ice Cream parlor and in the summer of that year, President George Washington is thought to have spent around $200 (a lot of money back then) satisfying his craving for the sweet icy treat.

Records from his home in Mt Vernon indicate the Washington also owned a few ice cream pots, fashioned from pewter and tin. It’s also recorded that Thomas Jefferson had a few ice houses, capable of being able to hold around 62 wagonloads of ice as well as untold amounts of ice cream.

The Lincolns also gained a taste for ice cream. Before Abraham Lincoln became President and even during his presidential term, his wife, Mary Todd, would hold strawberry parties for friends to celebrate the Berry season. Fresh strawberries would be served with cake and ice cream. 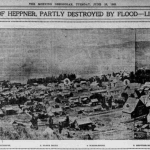 “Without a Second’s Warning” The Heppner Flood of 1903 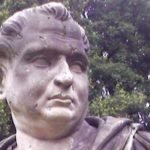 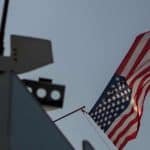 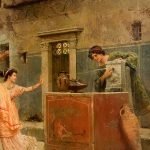 A popular Treat in America

The history of ice cream is firmly embedded in countries across the whole globe and is now very comfortably at home in the States.  It is now, quite possibly, the most popular of all desserts and around 9% of all the cow’s milk produced in the country is made into ice cream.

Apple pie may still be considered as popular but it is generally served with a scoop of ice cream on the side. It looks as though, no matter where it started life, ice cream is now planted firmly in the States, and is also a popular treat in many other countries.

2 thoughts on “Icecream: A Sweet History of an Icy Treat”